Features of the Day

I saw this a little while back and was just blown away! WOW! What you see here is a complete 3D printed model of the famous Dutch Warship Zeven Provincien from a company in Belgium known as MATERIALIZE NV – HOLY COW! What they can do now! It’s simply amazing that this technology can produce something this complex so quickly. A master modeler would take months or even possibly years to produce such a masterpiece and this thing has the potential to do it in a few hours. There is still the detail work which has to be done obviously – with clean up, painting and rigging. There is also the CAD modeling that the printer has to utilize to make the model also. So I imagine it still theoretically could take a few weeks or more beyond, but still! This model being the first prototype still took 7 months to make, but the possibilities!!!

This could make super nice quality models much less expensive in the future to be enjoyed by the average Joe on his shelf, mantle piece or ironing board.

And here’s the original article: http://www.materialise.com/en/blog/setting-sail-for-seven-provinces-materialise-3d-prints-a-ship-replica

It has come to my attention that there are certain individuals out there in game-land in admin or dev positions – and who are involved at some level with specifically pirate and age of sail video game efforts. HOWEVER these same individuals actually have little to no knowledge of the actual subject matter – especially with regards to history or ships.

It was recommended to me that I should write a short article in order to remedy this gaping lack of education which has been observed with these pillars (trying to contain my laughter) of the pirate genre gaming community.

So the subject of our article here is GALLEONS FOR DUMMIES.

As with so many complex subjects in any discipline, often we get things very wrong when we over-generalize or over-simplify.

During my tenure as one of the Army’s senior simulations officers I would often use the example of a tool box when explaining problems and solutions to my superiors and when training and mentoring my juniors. Complex problems require more than one tool. I cannot use a sledgehammer for instance to perform brain surgery. I cannot use a pair of pliers to torque head bolts, and I cannot use a turkey baster to educate a pair of idiots. Many different tools are required for many different jobs – and in a historical context some of these tools have retained some of their original characteristics, appearance and purpose – however many have not. Tools change over time. 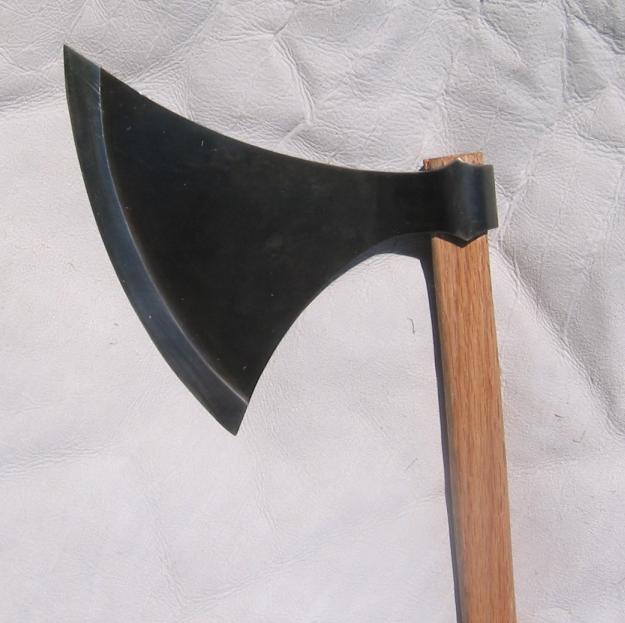 The following is also true of many different kinds of ships. We have discussed the frigate on this site at some length already and we know that an early Dutch Fregat from 1650 is vastly different in almost every conceivable way from a British frigate of 1850.

The same is true of galleons. Anyone who has studied ships or has an interest in them would know this right on the surface. However, for those who have never cared to learn, who don’t care to know even now or have never bothered learning at all – (because they thought it of secondary concern – even when it should be important to them because of that wonderful media which they’ve chosen to control, opine about, delve into and surround themselves in) I give you the opportunity to learn now.

Even a secondary desire to learn might also stem from an inclination to at least care about what enthusiasts or members of their “club” (common interest) know and care about. What is general and essential knowledge in the genre they’ve chosen? Is there any desire at all to impress these people with a strong general knowledge of maritime subjects themselves or even just a basic thirst to expand their knowledge of the supposedly shared hobby and subject of interest?

On the surface this appears as if these people either don’t care or are just stupid. Either one is really unforgivable when considering that people who might be in charge of – or directing such efforts might really offend the pants off of some of those passionate enthusiasts, contributors, etc… who might be key to making some really cutting edge AWESOME developmental THINGS – happen – especially if idiots weren’t in the way.

So having said all of that, lets talk about galleons considering what we’ve talked about above. Take the following statement from Wikipedia made by a PA! admin (trying again to contain a muffled laughter).

From the Wikipedia article on Galleons:

— which by the way – they have now locked.

So first – just so that we can all be crystal clear (and on the same sheet of music), I will make a couple of comparisons to these statements. So in this case we agree that ships are ships and there were many different kinds of ships which have existed over all of human history. We can also agree that there have been and are many different kinds of automobiles since the car was invented. A galleon is a kind of ship – AND – a cargo truck is a type of automobile.

Galleons went through the same types of architectural evolution that most other sailing vessels have over time. Galleons every 50 years or so – often appear vastly different from the previous generation.

Anyone with any knowledge of sailing ships and galleons KNOWS that a galleon from 1550 looks nothing like a galleon from 1750. My aim with this article is to help neophytes to this subject spot the differences.

I am not going to give you a definition of what a galleon is here. If you would like a good explanation, simply play GOF ERAS2 and look at comprehensive descriptions/ definitions that I wrote into the game. We have over 15 different galleon models in our game X 3 different skins for each one and in some instances, 5 or 6 skins for some of them. So we enjoy well over 50 uniquely different appearing galleons. There are also many good explanations of this from many books and some online which are far better than the broad oven-mit surgery attempt by Wikipedia. BTW if we went by Wikipedia’s definition, many other ships we have in the game including Dutch Retourschips and Warships – and English & French warships (which are technically galleons) would also be considered – bringing us up to hundreds of galleons in the game. LOL

So lets begin with the early galleons. The galleon originally evolved in the early 16th century from a need for better performance in several areas – cargo capacity, speed & better handling, as well as combat capability/defensibility and increased armament. The largest most capacious cargo carriers of the time were carracks. These were also the best armed and most capable in war with a stable main deck gun platform below and high castles on either side of the waist capable of warding off attacks. However, these high foc’stles and after-castles also made the ship top heavy and ungainly in bad weather. Carracks were extremely slow ships. Another ship known as the Holk was also built much like the Carrack but with little armament and lower castles. Holks were cargo carriers only. 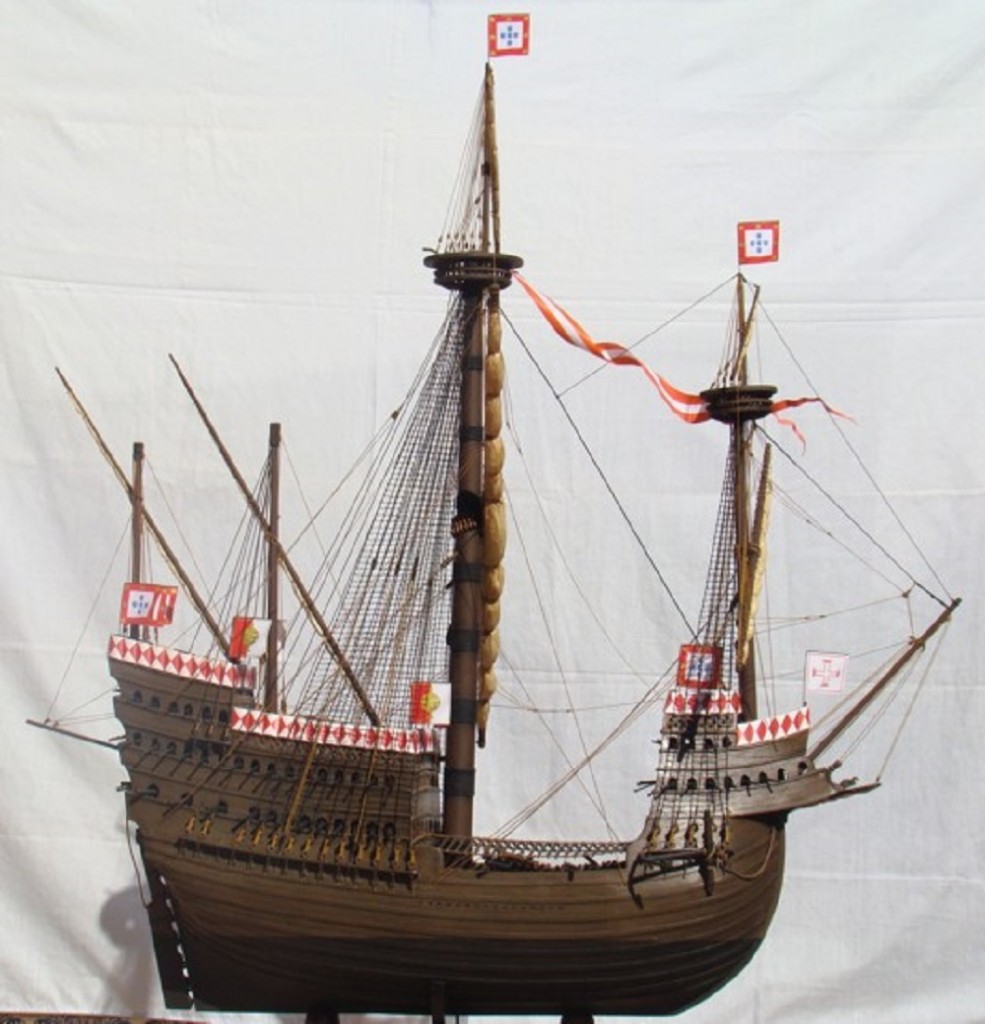 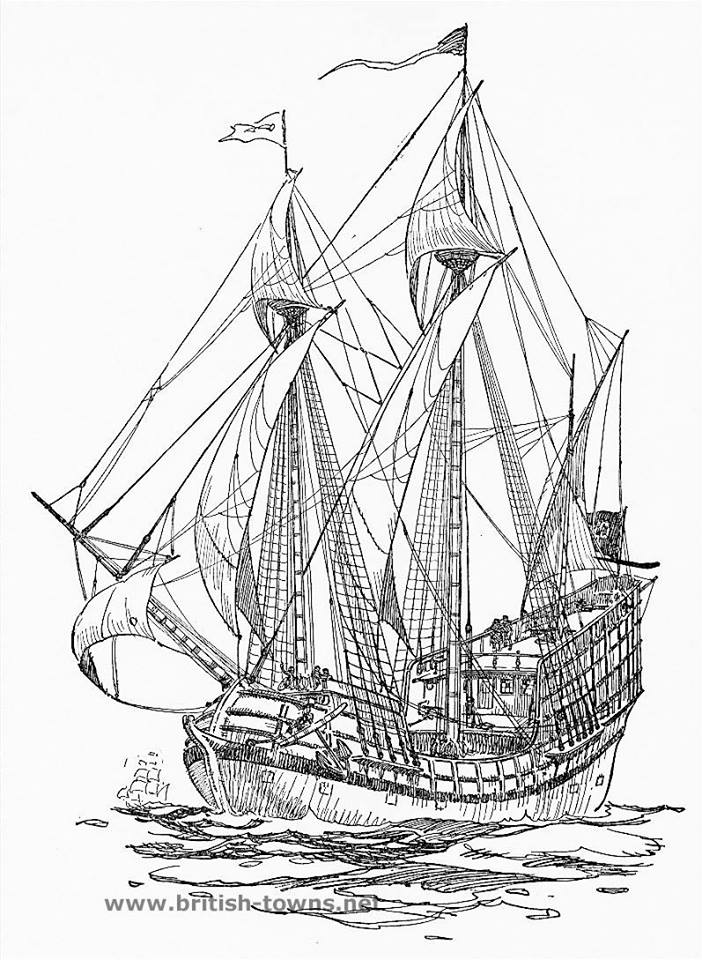 The fastest ships of the day were caravels. These ships were handy and seaworthy and key in early European exploration and expansion – especially by the Portuguese.

The Galleon was a hybrid combination of Carrack, Holk and Caravel into one ship. The galleon could carry more cargo than a carrack and was much more seaworthy with lower castles. It could also mount impressive armament and possessed high enough sloping castles to still be very defensible against armored and pike armed opponents in boarding actions. 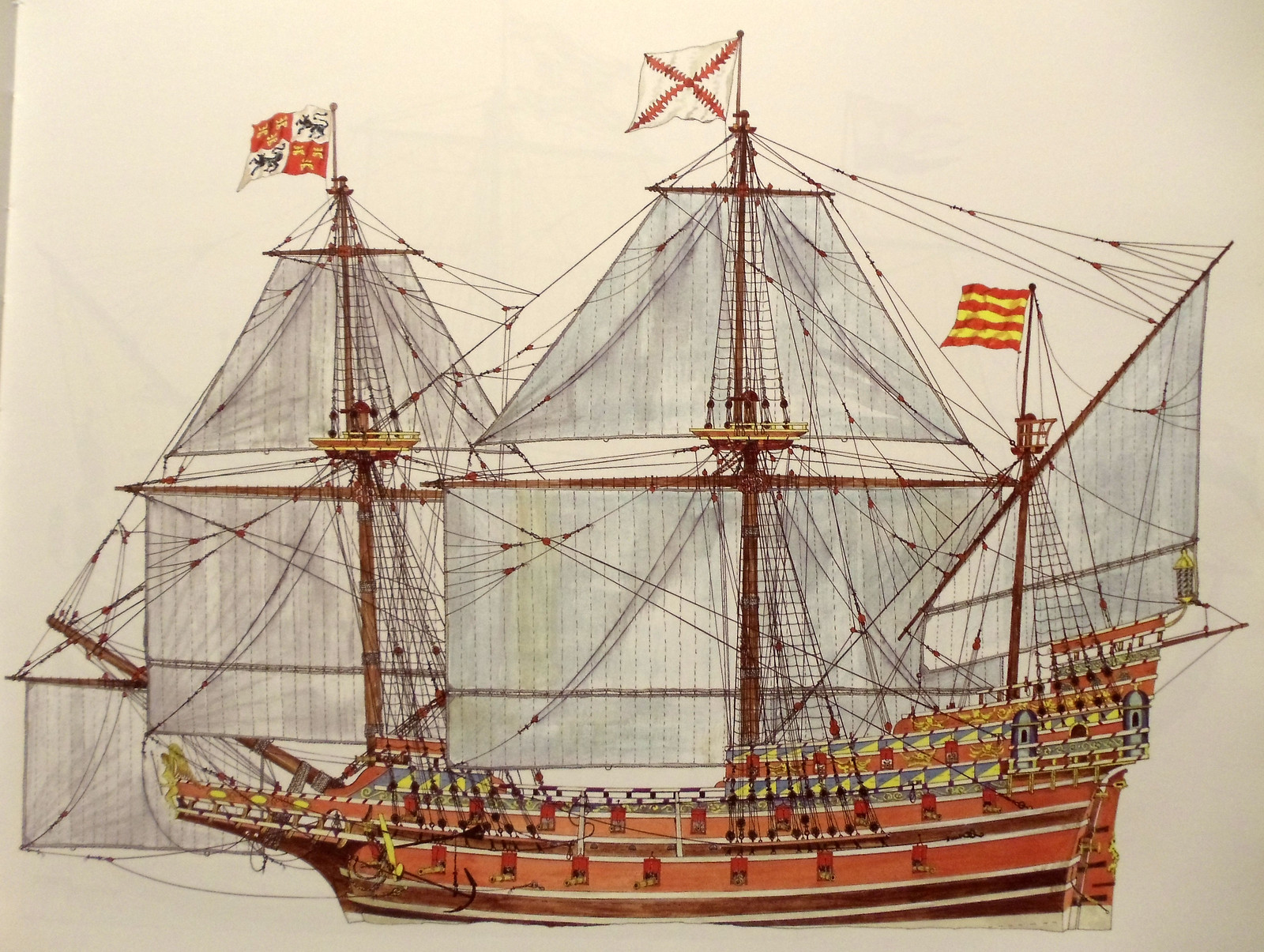 Just as the carrack had evolved for different purposes, the same thing occurred over time with the galleon as well. Galleons were excellent multi-purpose ships which could be used both for trade or war. However, wider, fatter, more capacious and less well armed varieties emerged with cargo transport as their main strength. Many like this were built by rich merchants for civilian and private use. 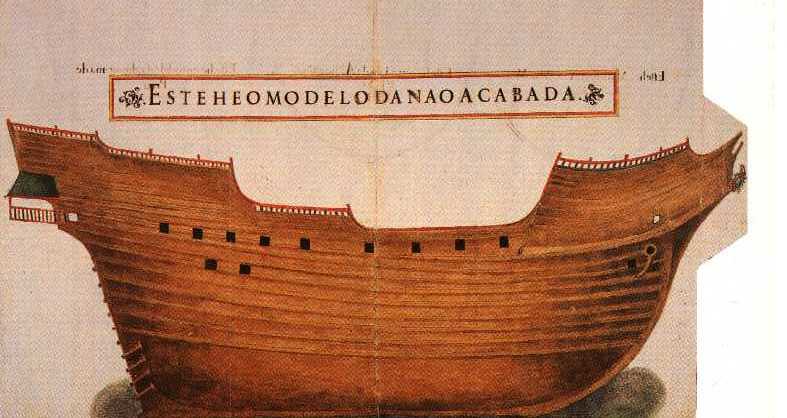 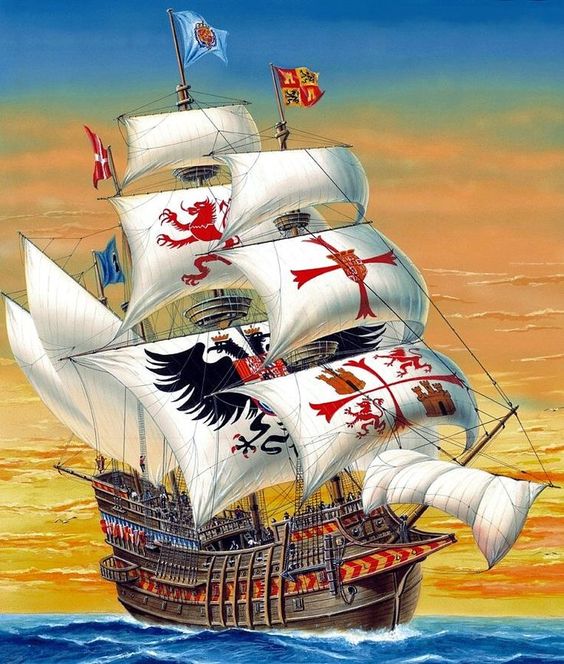 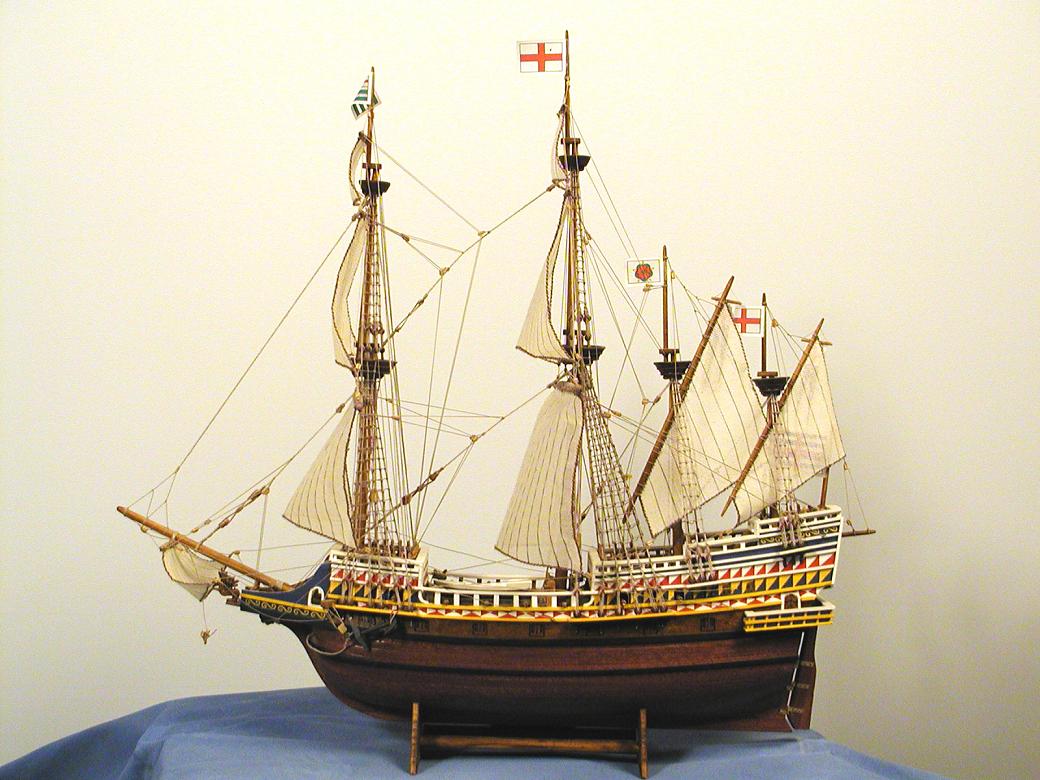 Notice a distinct evolution away from open rear galleries (balconies) and long, solid planked, mostly straightish beak-heads. Also notice that the fo’cstle becomes lower and less pronounced over time. The changes in these styling cues can be seen when viewing the differences between the galleons of the 1630s with those of the 1650s and 60s. 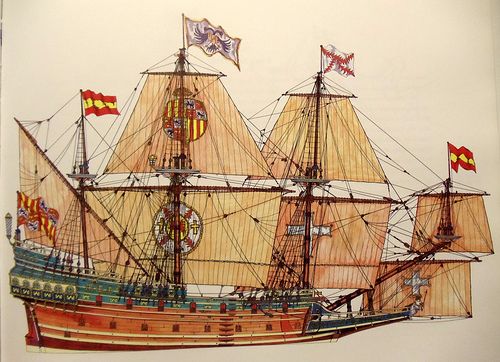 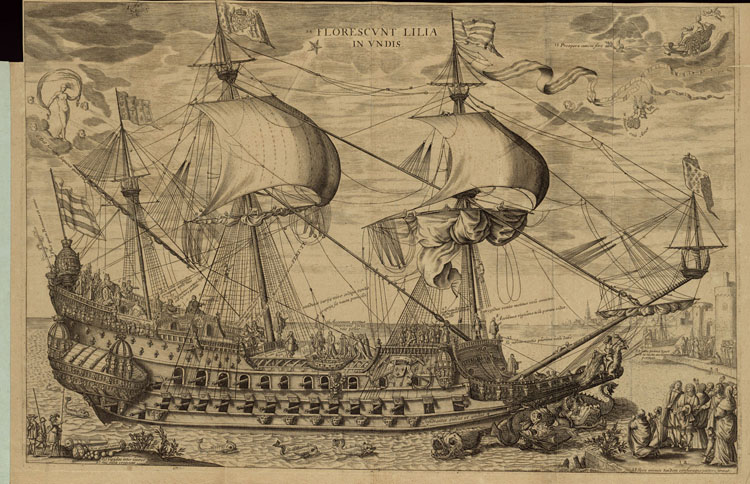 The Dutch began to part ways in galleon design building their own unique versions known as Retourschips. Some naval architects say they are a distinctly different ship type, but most believe they are a type of galleon. The retourschip shares many characteristics with the smaller Pinnaces (Pinaschip) of the time, (also considered by many to be just another type of smaller galleon), but these were usually one to two full gun decked ships. Many also point out that the Retouschips of this time begin to set the stage for the FREGAT (or Frigatta) styling of ship that would be favored in warship design over the next century — finally evolving into something altogether different. 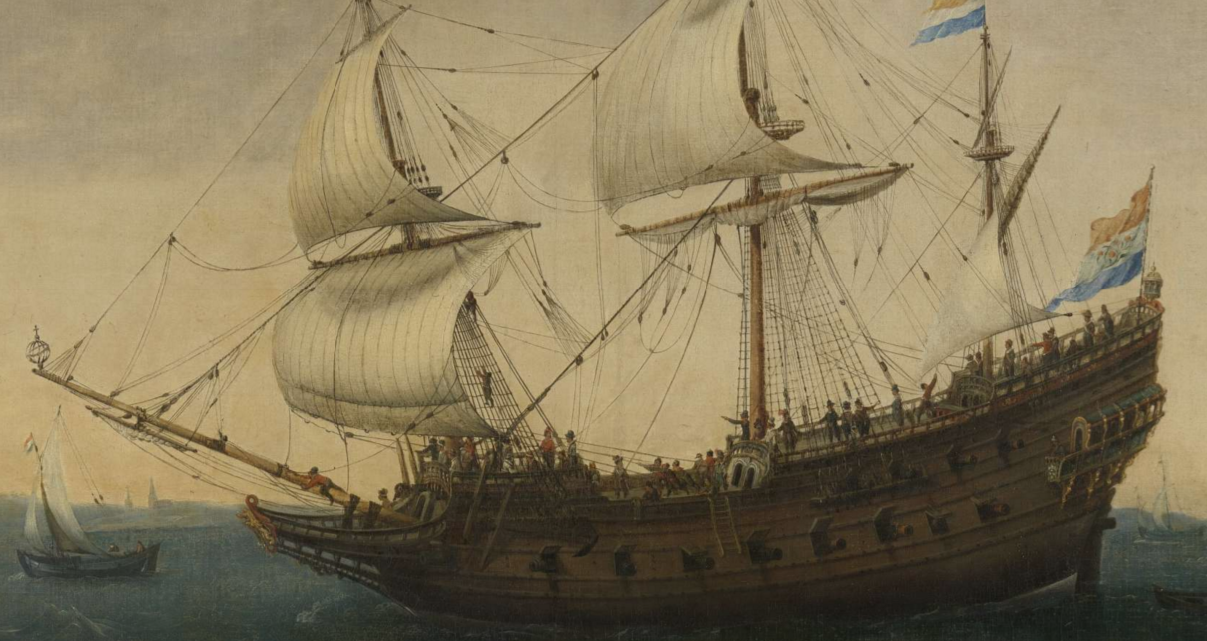 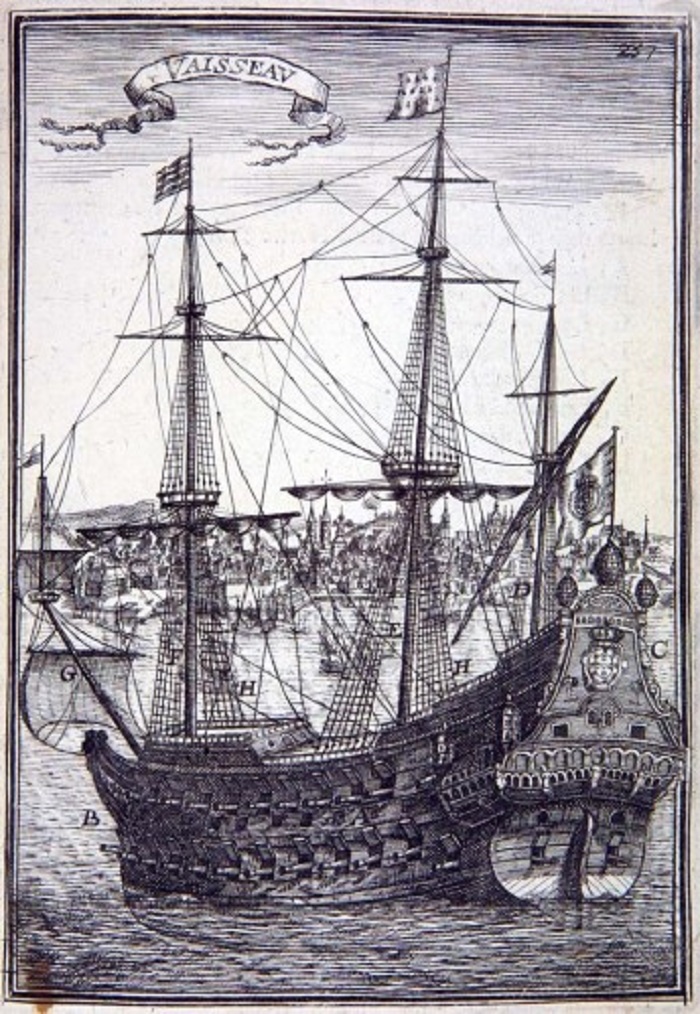 Notice as the evolution continues, the galleon’s after castles become smaller in size. 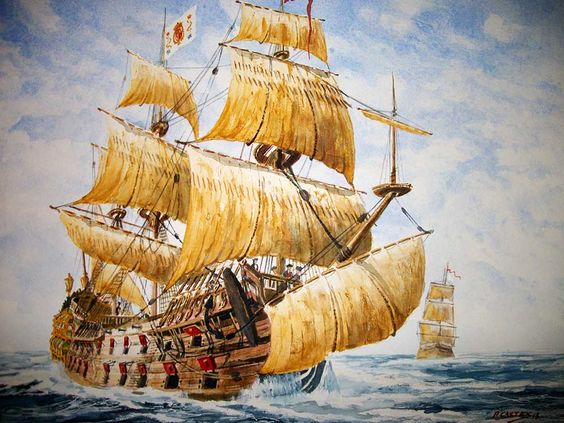 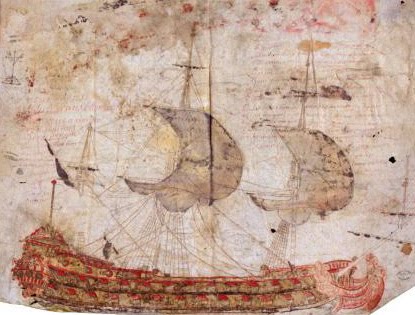 Here is an illustration to back up my point. This is the famous action between Anson’s Centurion seizing the “Galleon” Nuestra Senora de la Covadonga in 1742. Even though the upper super-structure of the galleon has clearly been cut down a piece and rounded to fit into contemporary building convention/style of the time, notice the clearly wide bulbous lower hull below with the characteristic flat and even somewhat concave looking notched-back stern. The dramatic difference is evident when comparing her to the Centurion’s stern with her gracefully rounded dove tailed planking curving and running upwards into the sternpost.

The galleons over the next half century (+) would be similar to what you see above but with even less decoration. The final derivation of galleon (built almost exclusive by the Spaniards in this late period of fighting sail) were simply an Iberian version of the more common “Indiaman” used by other European nations. Notice however that the Spanish type retains the old style flat tucked “notched back” square stern. I hope this clarifies things and that you may have learned something useful. Now that we are done with this little exercise, let me just ask you now. Do the pictures of galleons from 1550 look anything like –

And there you have it.

For more information on sailing ships and images of them for the purpose of education, please go to my repository of albums for ship images found here:

TO FEATURES OF THE DAY (PAGE 2) https://buccaneersreef.com/feature-day/