Features of the Day (Page 3)

Video of the Week 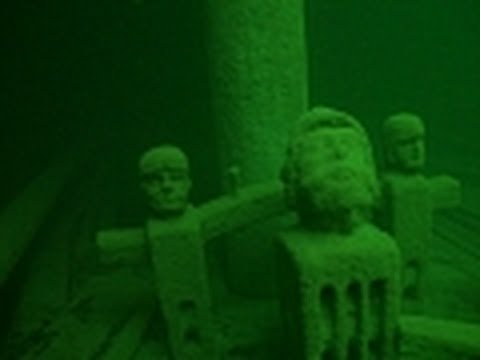 Well I don’t exactly agree with the title “Ghost ship” but I suppose it did heighten interest in NatGeo’s efforts in exploring and recovery efforts on the mostly intact 17th century Dutch Fluyt shipwreck found in the Baltic several years ago. When I was a boy I always dreamed of diving on sunken pirate shipwrecks and discovering treasures. Its what a boy’s dreams are made of. I have snorkeled above shallow wrecks and have taken a tethered dive with a certified instructor/guide, however I have never got my diving certification or dived on the wrecks of my dreams. It is on my bucket list and I plan to make it a reality in the next couple of years. However for the time being I get my fix from reading about it. This is one of the reasons that Robert F. Marx is one of my favorite authors and researchers. So this week lets talk about wrecks and the “Ghostship”.

The Baltic is unique in that its cold brackish water has very little oxygen – this may be bad for marine life, but is good for the thousands of ancient shipwrecks being continually discovered with today’s sophisticated equipment. Shipworm and other living organisms that normally destroy sunken wooden vessels are non-existent in the Baltic at the right depths.

The most famous ship found in these waters is of course the great and mighty warship Wasa which sunk on her maiden voyage in 1628. Wasa Wikipedia MK’s Wasa images library
She is the finest and ONLY surviving example of a fully intact 17th century Manowar in existence. She was raised in the 1950s and is now one of Sweden’s greatest tourist attractions with a fine museum built around the fully preserved and observable wreck. Vasa Museum Stockholm

Other great ships have been found as well. I had the privilege to see the remains of the warship Kronan on exhibit in 1993. She was another great Swedish flagship which was destroyed due to her magazine exploding at the Second Battle of Öland (1676) during the Scanian War. Kronan

A more recent discovery was yet another Swedish flagship which was thought lost to history. The great Swedish warship Mars was one of the largest vessels of her day and ironically destroyed in a very similar fate to the Kronan – but over a hundred years earlier in 1564 at the First Battle of Öland 1564 She is also much better preserved than Kronan. Her hull is largely intact. 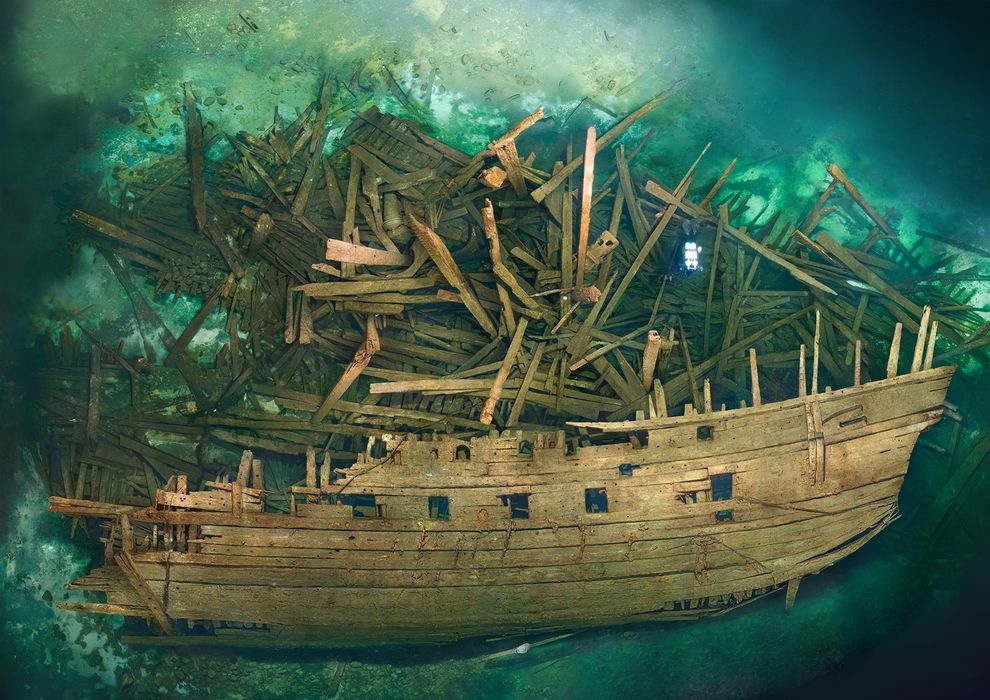 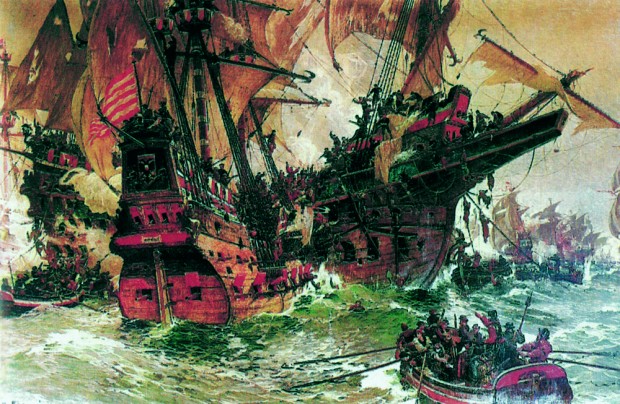 Here’s a video of Mars

Video of the Warship Mars

There is also the wreck of the Dutch ship Vrouw Maria, also found just a few years ago – lost in the 18th century and with a unique cargo – a treasure trove of art originally intended for Russian Tsarina Catherine the Great – which also survived the centuries mostly intact. Vrouw Maria 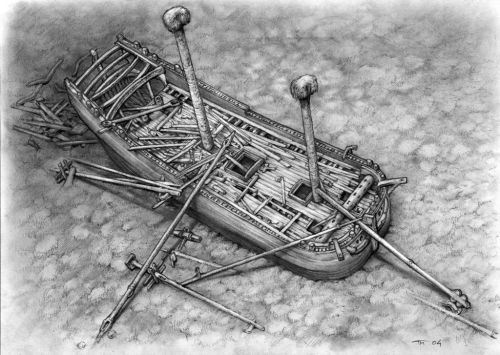 The wreck we are focusing on today however is unknown. Some have called it the Swan because that is the subject preserved almost perfectly in the carved and painted image upon her tafferel(which fell off of the wreck onto the sea floor along with her other sculptures(Hoekman). She was abandoned for unknown reasons and a thorough survey of the wreck shows negligible damage. The consensus is that she must have been leaking and the small crew could not keep her pumped out in stormy conditions, so abandoned her. At least that’s their theory. There is no record of this ship or its cargo, so we just don’t know – hence why NatGeo is calling her “The Ghostship”. Its a good theory, but causes my own mind to wander…..could German pirates out of Lubeck taken the ship, offloaded the cargo and forced the men aboard their own ship? Fluyt’s were known for having extremely small crews. Often only a handful of men were required to operate them – which is one of the reasons they were so economically popular at the time. She may have had less than 10 men aboard – maybe even 6 experienced sailors could handle such a ship. So they abandon her and she wanders on alone until stormy weather takes her down. Or perhaps the pirates knock open a seam somewhere from within to scuttle her. I know I know….what an imagination. Well my theory is as good as any other so I’m sticking to it!

She was found by researchers looking for a spyplane that was lost during the Cold War and they accidentally found the Ghostship a short distance away from the airplane. How weird is that?! She is mostly intact sitting upright on her bottom with her masts still standing. She’s been dated to around 1650. 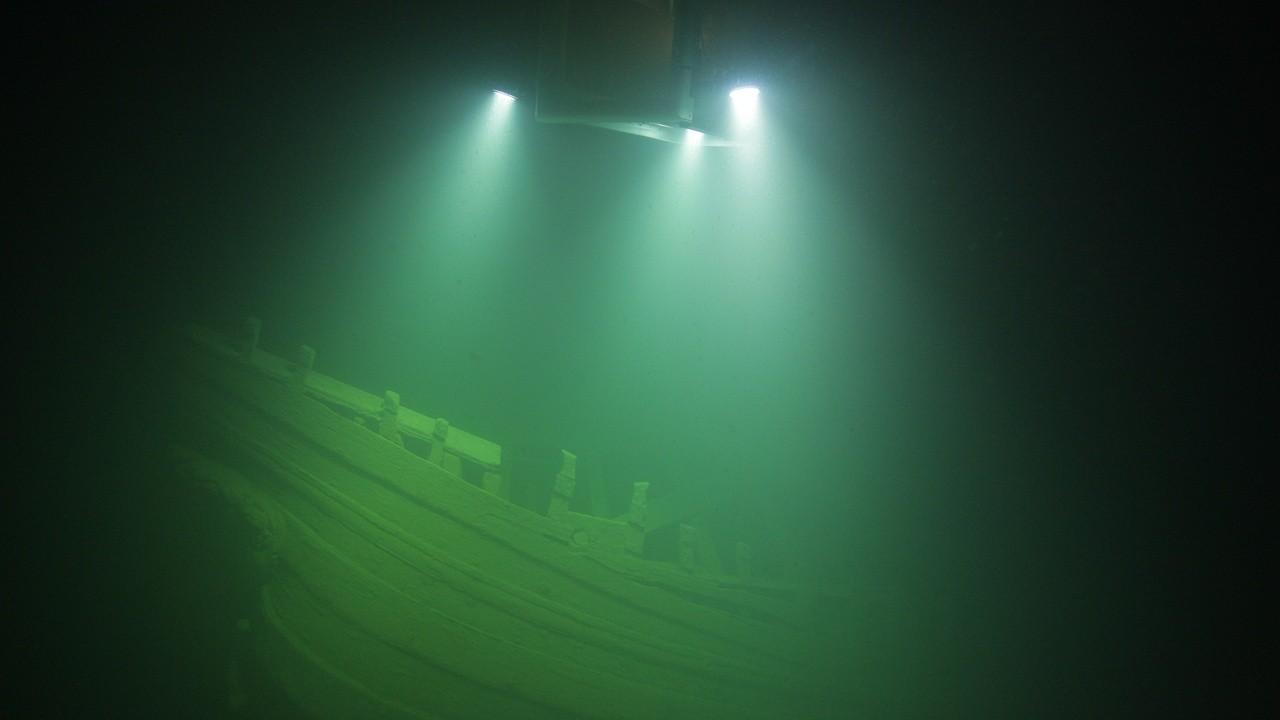 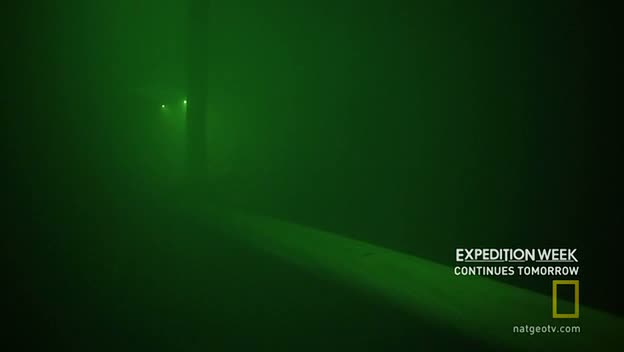 Anyway, I happened upon a video of this ship earlier this week and watched the whole thing through. Its quite good and very well researched. There is also a lot of footage of the Kalmar Nyckel replica which is a similar but larger replica of a 17th century Dutch Pinnace. Kalmar Nyckel I especially enjoyed the segment starting at 17:10 because there is an excellent historic narrative where they cover the Dutch Golden Age and focus on their immense ship building efforts. They reaffirm everything I’ve read and researched about the Dutch building and owning around 80 percent of the world’s ships at this time in history. Excellent clip. I was going to burn just that clip out but I can’t download that particular video because of NatGeo’s copyright protection. The whole vid is worth watching, but for the meat showing the ship and this historical commentary watch from 17:10 – 20:40. This segment is AMAZING and I highly recommend you spend the three minutes to check it out. Also there is a very good segment which shows off final conclusions of identification and their reconstructed 3D model of the ship towards the end: 38:50 There’s some good footage of handling the Kalmar Nyckel right after. BEAUTIFUL! I need to make this ship.

And check out this page on their website here. channel.nationalgeographic.com/videos/dutch-shipbuilding/ The clip I was talking about is there. WARNING: It will make you watch a stupid 28 second video add before you can watch the clip. 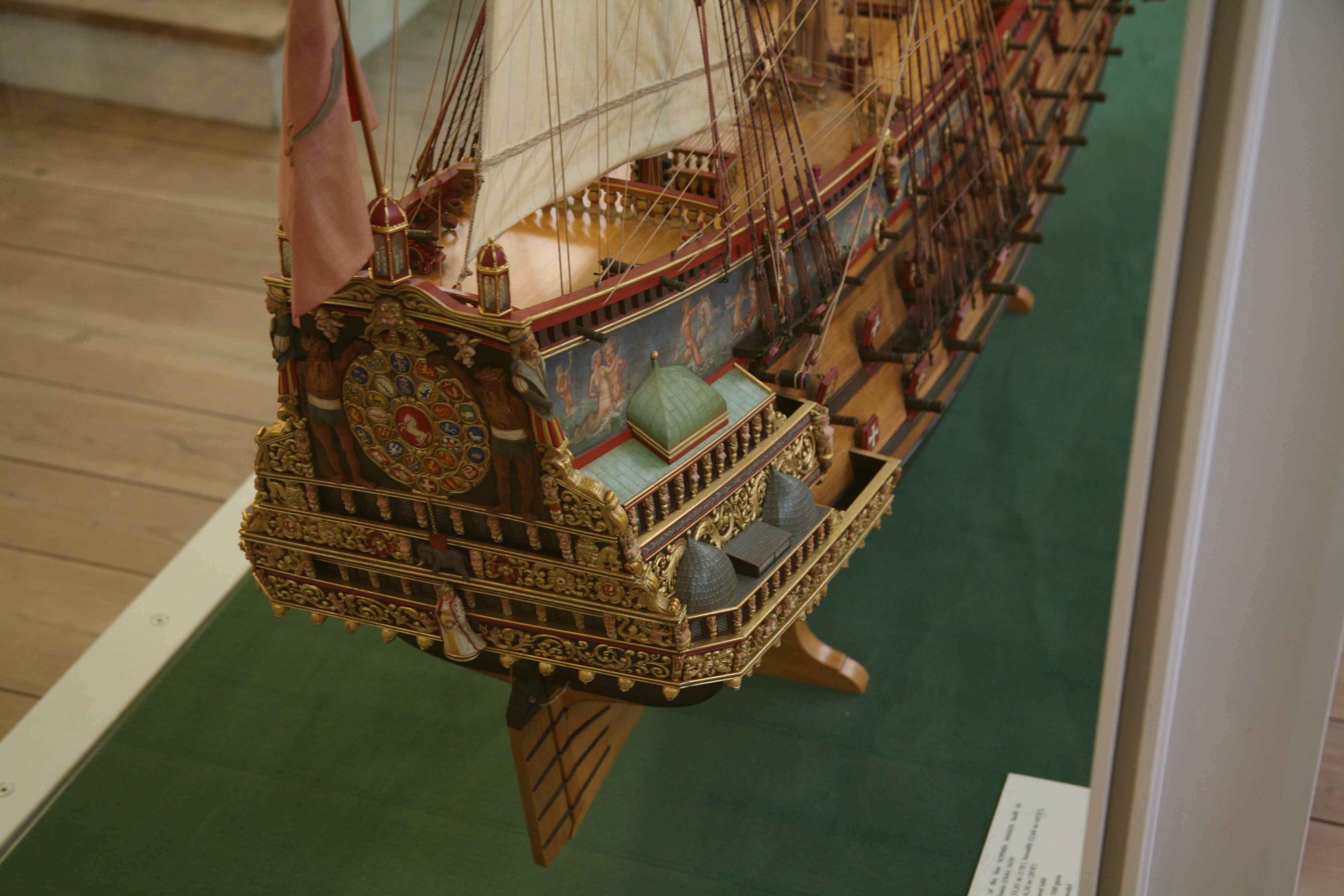 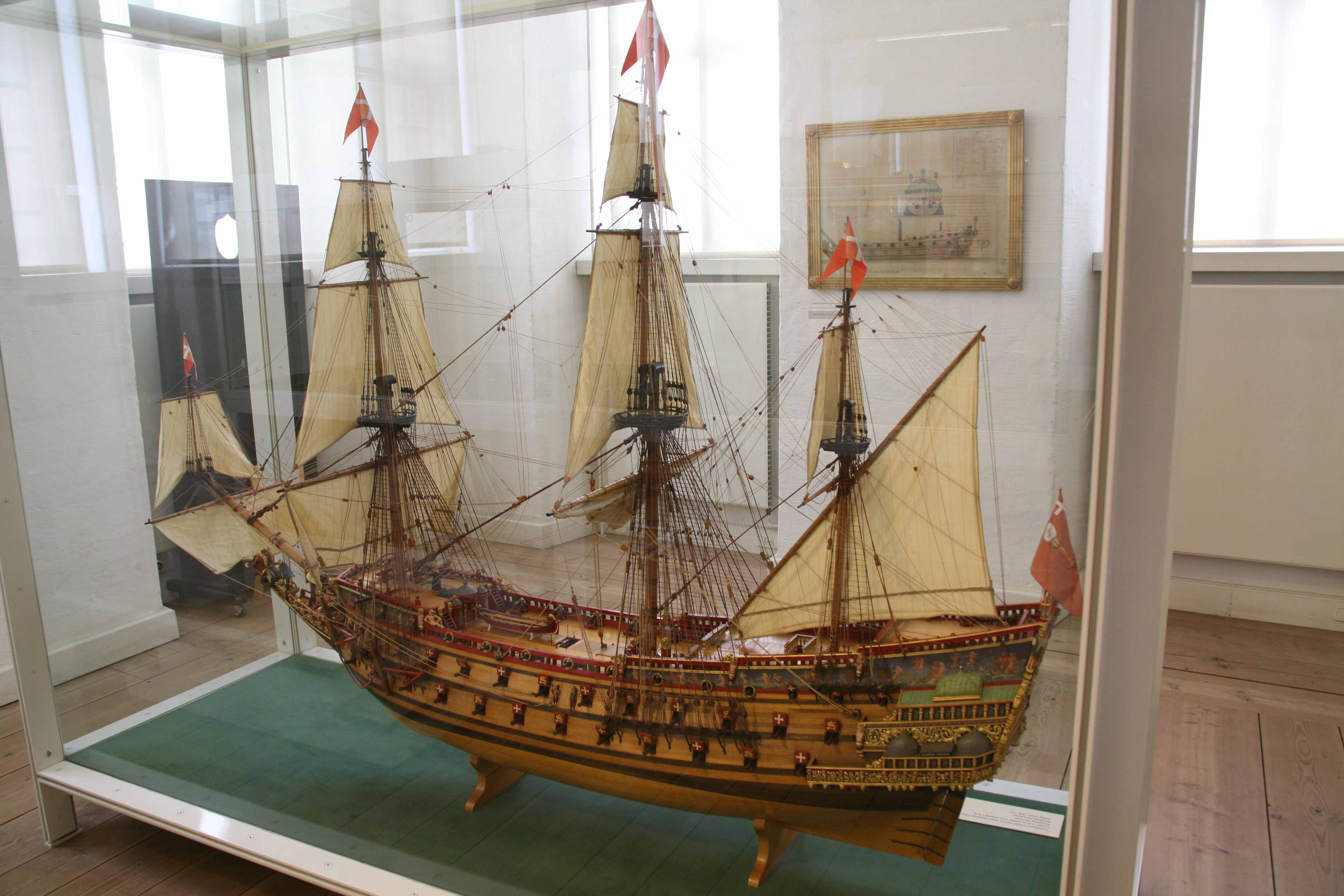 The beautiful ship of the line, Sophia Amalia was constructed for the Danish Navy under the English shipwright James Robbins at the Hovedøen dockyards in Christiania (Oslo) Norway in 1650. Traditionally a shipyard for merchant ships, only four warships were built there between 1646-1700. She was commissioned by King Christian IV specifically to surpass the great English ship HMS Sovereign of the Seas. It is VERY clear when you look at her that James Robbins seems to have almost copied the great Phineas Pett’s design for Sovereign of the Seas. They almost look like they could be sisters. The English and Pett influence is clearly evident. Upon her completion, she was largest ship built for Dano-Norwegian navy up to that time. She was 51.8 meters long and at that time one of the largest naval vessels in the world. She was named after the German Princess of Brunswick – Sophia Amalia, the wife of King Frederick III.

During her career she took part in the numerous battles of the Second Northern War, the Dano-Swedish War of 1658-1660, and the Scanian War, however she is conspicuously missing from the line-up at the great Dutch-Danish victory over the Grand Swedish Fleet at the Battle of Oland(1676). I have not been able to find out why??? She would have been the largest ship there. Instead the 68gun Churprindsen is recorded as Admiral Niels Juel’s flagship and the 80gun Christianus V as Dutch Admiral Cornelis Tromp’s flagship. I know from a study of the battle that there had been a lot of bad weather preceding, so perhaps part of the fleet fell behind? Sofia Amalia was finally condemned and broken up in 1687.

This beautiful model of this great and powerful warship currently resides in the Danish Maritime Museum in Copenhagen, Denmark. Royal Danish Naval Museum

Here are a bunch of great pics on an excellent German model ship site I often visit: Pictures of ship model Sophia Amalia

Isn’t she lovely! I love the Seahorse on the figurehead on this one. I have assembled a large amount of photos for her. I even have some Van de Velde drawings of her which is fascinating to me because it causes me to ask the questions. Did Van de Velde do the drawings in Denmark? Did he accompany the fleet there as he so often did? Or did the ship come to Holland on a state visit. I think not. I do not think her deep draft would have allowed her to make it to any of the Dutch cities unless she was cradled. I very much doubt they would have gone to the trouble plus it would be a little demeaning for a great warship. I think they must have cradled the Royal Charles when they brought her back to Amsterdam as a war trophy. Intriguing to think about nonetheless! I will be posting this great new collection to my ship images repository on Flickr in the next day.